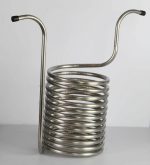 Wort Chillers are absolutely essential when it comes to brewing beer. They help to cool the wort quickly from boiling to pitching temperature. This has four advantages:

After your beer wort has reached a rolling boil. Connect the Stainless Steel Wort Chiller to your cold water source (tap water or refrigerator/chiller water). Wait till the wort is cooled to 30 Degrees Celsius or pitching temperature.

Coiled part of the chiller: 24cm high x 19cm diameter
Total height of the chiller: 41cm
Tubing: 12.7mm, 304 Stainless
Material SS304 SS.
Compatible with the Brewzilla and most brew kettles of up to 40 Liters capacity.
Please connect the endpoints with 1/2 inch flexible pipe (silicone or PVC) to connect with the chilled water source.

Please go through our FAQ for more details.

Method 1 (for less than 50-liter batches)

The second method is where you pump your hot wort through the middle of the chiller.  Use a 1/2 inch silicone tube to connect from your boiler to a pump and then through this coil chiller and then back to the boiler.  Turn on the pump and ensure the chiller has got up to your wort boiling temperature to heat sterilize the coil. Then immerse the coil into a bucket of ice and water mixed together.  Run the pump continuously until the wort cools down to the desired point. This method is similar to the plate chiller used in a professional brewery.

Note: It will be shipped by courier only

Is copper better than Stainless Steel

Plate chillers consist of two sets of interlocking plates. We pass cold water through one set and boiling wort through the other to create a heat exchange.

Essentially, plate chillers are ideal for industrial use if you are planning to chill a large batch (100 Liters or more) and are brewing multiple times a week. For a smaller 20-50 liters batch, one can simply use a wort chiller pipe to achieve the desired results.

When to add Wort Chiller?

After you have removed the spent grains, one can add the wort chiller. This way during the rolling boil, the metal surfaces also get sanitized. After the flame is turned off, one can connect it to the cold water source.
Wort chiller works through a simple heat exchange mechanism. The chilled water inside the pipe cools down the wort as it flows. In about 15 minutes, it can bring 35 liters of boiling water to room temperature.

How Long does it take to Chill Beer?

10 to 15 minutes. However Beer chilling depends on variety of factors:

How to chill the Beer Wort Fast?

How do you chill wort quickly?

After boiling your homebrew it’s important to cool your wort as quickly as possible. There are several methods of chilling your wort quickly both with or without cooling equipments. In most cases it depends on the kind of brewing you are upto. Some methods to cool your wort are :

Many of times for the first couple of batches brewers don’t have the availability of wort chiller. And sometimes it’s also the demand of the brew to use natural methods.

Can I let my wort cool overnight?

Yes, one can leave the wort to cool naturally overnight. But it is important to understand the risk before you do it.

Cons: Cooling wort overnight has its own set of problems. Keeping wort hot for too long will lead to a reduction in aromatic hop and essential oils needed for the flavors. It will increase your brew day from 1/2 a day to 2 days. Also certain off-flavors esp DMS seep into the beer. The naturally cooled wort starts tasting like tinned baked beans.

The overnight wait contaminates the wort before one is able to pitch in the yeast. Sanitation becomes a big issue in this method which affects your end product. Achieving ‘cold break’ (protein coming out of the wort, excess protein leads to haze and staling of the beer quickly) becomes impossible in the slow cooling of the wort.

There are more ways than one to brewing beer. Do what works for you.

How long does a wort chiller take?

The time a wort chiller takes to cool the wort down depends on the ambient temperature as well as the temperature of the water supply. The amount of wort and the water used accordingly also decides the time taken. Approximately, a wort chiller would take around 20 minutes for a 20Liter/ 5-gallon hot wort to come from 100 degrees C to 28 degrees. Good quality plus does the work pretty good