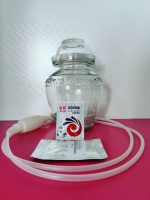 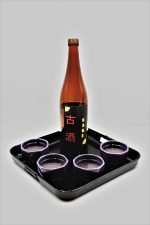 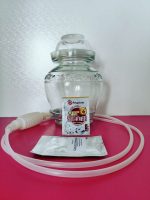 Use this with polished sticky rice. Low fat (polished rice) with soft water is ideal for rice saki/koji or Chinese fermented rice beverages.

The Kit consists of:

Sake a.k.a. Rice wine is a traditional Japanese, Korean, and Chinese beverage made from polished rice. We can consume it both in filtered or unfiltered form depending on the style. We can also use this kit to make the Rice Beer styles prevalent in the North East.

Here is a comprehensive guide to Japanese and Korean sake (rice wine) culture. We can use it to make rice beer and tongba (millet beer) as well. Sake is unique. It doesn’t require any fruit in its making even though we call it wine.

Is it ok to get Unami flavors?

Umami: Soy sauce or Thai fish curry aromas and flavors. It primarily comes from amino acids released from the autolysis of yeast. Slight umami flavor is desirable in Sake and some aged beers but it is a difficult flavor to balance. The usual culprit is the beverage sitting over dead yeast (cake/ lees) for a few weeks. Some brewers have switched to lower protein malts & changes in mashing to reduce Umami. Conical fermenters where the yeast cake can be drained out is recommended to combat these notes.

How long my home brew Last?

Typically bottled home brew beer has a shelf life of 6 months. However, most home-brew beer is consumed within a week to a month of bottling or kegging. However, some people regularly store homebrew beer for up to 6 months successfully. Beyond this, the beer is still safe for consumption, just that it will not taste fresh. However, a couple of factors need to be taken into account to determine the shelf life.

What is the Difference between Koji & Chinese Rice Yeast Balls?

Koji has its origin in Japan. It is used extensively in making Sake. After the fermentation is over, the Brewmaster would collect the rice inoculated with the yeast. He would dry and powder the spores for his next batch.

Chinese Rice Ball, as the name suggest has its origin in China. After the fermentation is over, the brewmaster would collect the residue. It would be dried and shaped into small balls (laddoo) which is then used for the next batch.

One can unfortunately not use Baker’s yeast or wine yeast or beer yeast to make rice wine. The reason being that these yeast don’t have the Alpha amylase enzyme needed to convert starch into sugar.

There is a huge variety of rice wine and traditions. Some like it tart, some sweet. Some like it filtered while most like it milky white. Some like it plain, while some infuse spices and a lot of people infuse flowers (floral aromas). It is hard to generalize the taste and flavors of rice. However, in general, it is a slightly tart, mildly sweet, and alcoholic beverage.

Unfiltered Rice wine/Rice Beer is always turbid & milky white like milk. The ones served in restaurants are of often pale yellow (straw color) and clearer. When the filtered rice wine is stored for longer duration, they can deepen color even further to develop a tan like light brown color.

Most traditional recipes call for cloudy white slightly effervescent rice beer kept in ceramic jars, which is stirred before serving. However to pack in glass or store the rice beer for long duration aging, filtering it to make it clear is recommended

The aromatic rice wine/beer has ~13-18% alcohol when finished. The Chinese dry rice wine can have 18%+ alcohol content.

Rice fermentation is a 2 stage continuous process. The koji is breaking down starch and converting it to alcohol simultaneously. As a result it takes about 2-3 weeks to complete the fermentation.

However most practitioners consume their rice wine fresh (young) which is usually 48 hours to 1 week old. Every time they decant some wine, they top it up with more steam rice and water